Join us for the Sacramento Stonewall Democrats February meeting on Monday February 8th! 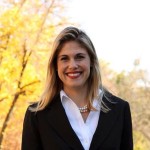 January is National Slavery and Human Trafficking Prevention Month and Maggy will share with the Stonewall membership the efforts underway statewide to combat human trafficking.