Join us for the Sacramento Stonewall Democrats October meeting on Monday October 12th! 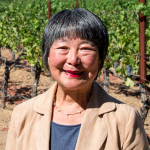 Guest Speaker – Former Assemblymember and candidate for State Senate Mariko Yamada will be joining us for a discussion and to answer questions!