Join us for the Sacramento Stonewall Democrats September meeting on Monday September 14th! 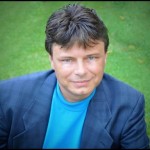 Guest Speaker –
Don Bentz, the Executive Director of the Sacramento LGBT Community Center, will be our September Guest Speaker!