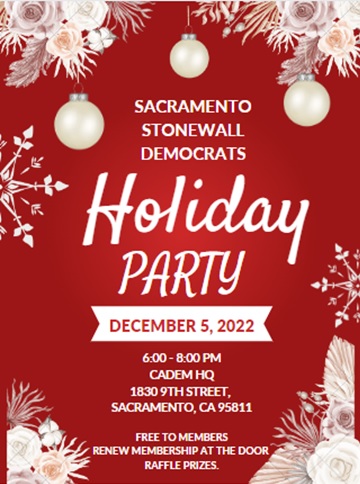 Rosanna Herber, a Democrat incumbent running for the Sacramento Municipal Utility District (SMUD) Board, was also be present.  Herber is the highest-ranking openly LGBT elected official in Sacramento County.

State Senator Weiner is a champion for LGBTQ+ rights and former Chair of the state legislature’s LGBT Legislative Caucus. He has introduced bills that were signed into law such as SB 145 that stops officials from putting LGBT young people on the sex offender registry, when this never happens to similarly situated young straight people. Senator Weiner also introduced SB 159. This law increases access to HIV prevention medication.

Every year, the Sacramento Stonewall Democratic Club holds a gala where we recognize local leaders who embody the goals of the club and of the Democratic Party – freedom from fear and want, freedom of expression, and freedom of worship. The idea comes from Franklin Roosevelt’s Annual Address to Congress in 1941.

Freedom of Speech and Expression